“Sokratisches Philosophieren” Bd. 12: The Challenge of Dialogue Socratic Dialogue and Other Forms of Dialogue in Different Political Systems and Cultures 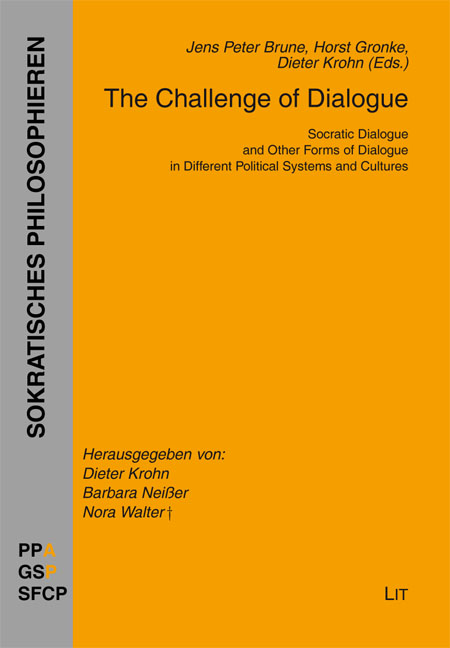 The twelfth volume of the “Series on Socratic Philosophizing” reflects the international discussion on Socratic philosophizing within a global perspective. This volume throws light on the challenges Socratic Dialogue and other forms of dialogue face in different political systems and cultures. The following sub-topics are discussed: the development of the theory and the practice of Socratic Dialogue, examples of dialogues practised in different political systems, and the role of dialogue in mutual understanding within and between different cultures and in the political and economic sectors.

Dr. Jens Peter Brune, Berlin, works at the Free University of Berlin in the Research project on Complete Works of Hans Jonas. He is member of the PPA and the GSP.

Dr. Horst Gronke, Berlin, founded the company “pro argumentis” which specializes in Socratic Dialogue. He is deputy chair of the GSP and member of the PPA.

Dr. Dieter Krohn, Hannover, is Executive Member of the Philosophical-Political Academy (PPA) and Chair of the Society of Socratic Facilitators (GSP).